FROM THE CHAIRMAN’S DESK

I would like to congratulate you all for making the Annual Convention of the IIA West Bengal Chapter ‘Hospitality Architecture and Design’ a grand success! I thank all the delegates of SAARCH, Ar. Uday Gadkari, COA President, Ar. Prakash Deshmukh, IIA President, speakers, participants, students and volunteers who were relentless in their efforts in organising the same.

This year the added attraction was the SAARCH Council meet which preceded the Convention and were attended by the architects representing the SAARC countries. I thank them all through our SAARCH Chair Person Ar. Dorji Yangki for their participation. We had very positive discussions regarding various cross border issues relating to architecture and I’m very hopeful that in years to come we will have greater interactions among the SAARCH architects academically as well as professionally. This also brings out the need for establishing a permanent office of SAARCH for carrying out its activities and the members have expressed their desire to have the same in India. I am very proud to announce that the West Bengal Chapter has been always ready to take up the responsibility for setting up the office at our premise at Shantipally. The geographical location of Kolkata is an added advantage. However the final decision rests with the IIA parent body and hope that our optimism gets rewarded.

It is worth mentioning that the IIA West Bengal Chapter bears a very cordial relations to other chapters of IIA . As part of this gesture I had the honour of being invited at the celebration of the 25th Foundation Day of the Andhra Pradesh Chapter and be a part of their celebration. We wish to return the favour at the latest opportunity.

May the season of rains bestow you all with showers of happiness! 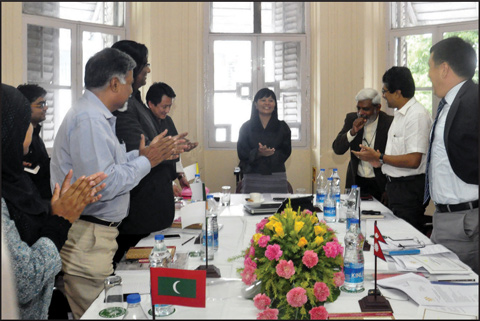 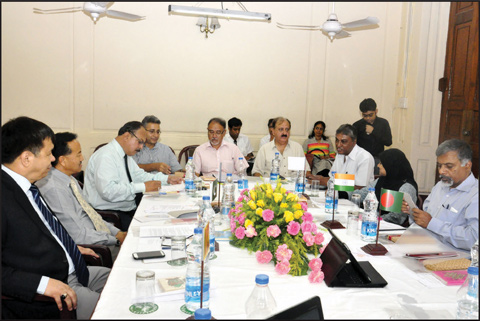 The meeting in progress

The SAARCH meeting explored various ideas relating to the formation of workgroups for cross border training for the students of Architecture, accreditation of schools of Architecture and acknowledgement of degrees offered by schools across the SAARC member countries. 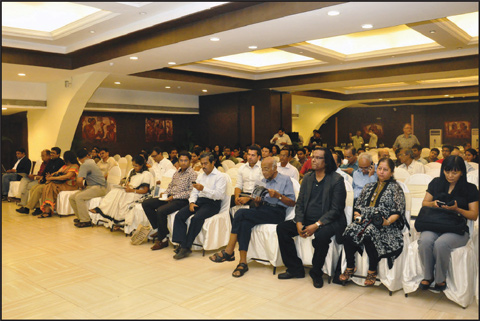 Delegates and members during the Convention

On 28th and 29th June 2013 The IIA West Bengal Chapter organized the Chapter Convention entitled Â‘HA+D Hospitality Architecture & Design’. The convention intended to assemble a wide variety of works from different architects across the country and abroad. The theme for the Convention centrifuged round the contemporary design concepts considerations and latest technologies associated with the Hospitality sector and how the projects have evolved from the realm of cross disciplinary ideas and knowledge.

The Convention began on 28th evening with a welcome address by the Chapter Chairman Ar. Dilip Chandra Chatterjee followed by the lighting of lamp and awarding of student scholarships. The Chairperson of SAARCH was the Chief Guest. The presentation started after the felicitation of the SAARCH representatives.

A huge thank you to all the members who contributed to the special issue of the Journal of The Indian Institute of Architects dedicated to The West Bengal Chapter. We received more than that could be accommodated and Ar. Gita Balkrishnan had a tough time selecting from them.

Yet another Annual Convention, this time, with the theme of ‘Hospitality Architecture and Design’ is over and we at the Chapter trust that all of us are suitably enriched and inspired. The presentations by architects of national and international repute were not just informative and analytical but beautifully lyrical as well. A lively panel discussion that included experts from various associated fields and ably portrayed and explored the multi-faceted nature of Hospitality architecture, was in our opinion, a necessary high of this Convention.

We are indeed very happy with the eager response we received from students of the eastern region and do hope that the wholesomeness of such conventions are well absorbed by them. With the very best of wishes for a trouble-free and enjoyable monsoon.

The President IIA, Chairperson SAARCH, Vice President ARCASIA Zone A along with other national and international delegates of SAARCH at The IIA West Bengal Chapter Office

teacher exchange programs etc. Issues such as Disaster Mitigation and management and cross border practice were also discussed along with the scheduled agenda and proceedings of the meeting. 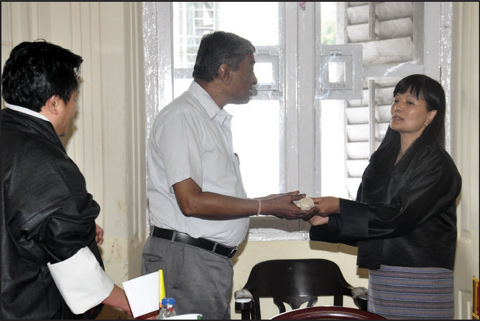 The need for establishment of a permanent office for SAARCH was felt owing to its increasing activities and interactions among the member countries.

Ar. Debabrata Ghosh mentioned that the SAARC secretariat has extended its accreditation of SAARCH up to 2014. He thanked Ar. Jayantha Perera for taking the initiative to get the accreditation validated.

Ar. Swarup Koney and Ar. Arun Dev Panth informed that ARCASIA forum and Assembly is scheduled from 6th to 10th October 2013 in Nepal and invited all the member institutes to participate in good numbers. 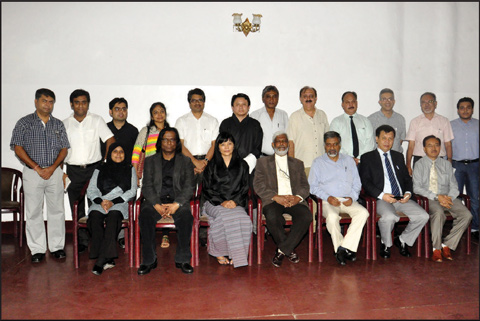 Delegates and volunteers at the Tolly Club, Kolkata

The meeting ended with the vote of thanks to the chair. We are pleased to inform you that this was followed by a beautiful mail from Ar Dorji Yangki on behalf of all the presidents and council members of SAARCH congratulating the WB Chapter, the Chapter Chairman, Ar. Dilip Chandra Chatterjee and his team for organising the meeting and the wonderful hospitality provided. We also received warm greetings from Karachi and Kathmandu.

The next day the technical sessions started with the Moderator’s address by Ar. Mukul Mittra. The speakers of the morning session were Ar. Mustapha Khalid Palash of Bangladesh and Ar. Canna Patel from India.

Ar. Mustapha Khalid Palash’s presentation gave us an insight into the ongoing architecture of Bangladesh which is poised between the modernist demeanor of glass and concrete while remaining true to the oriental design principles. A multi talented persona himself, his works reflect an eclectic flavor.

and valuable feedback from people belonging to backgrounds other than architectural while their concerns and ideas will surely provide a better understanding for architects in the design of new hotels or upgrading existing ones. The concluding Dinner was arranged at Hotel Golden Park, Ho Chi Minh Sarani, Kolkata where the attendees where mesmerised by the lyrical symphony of the folk band “Dohar “. Their music brought the rustic flavour of Bengal and the sweetness of melody got the entire audience to sing to their performance.

The Indian Institute of Architects Andhra Pradesh Chapter celebrated the 25th Foundation Day at Hotel Avasa on 11th May 2013. Our Chapter Chairman Ar. Dilip Chandra Chatterjee was invited to attend the ceremony.

The A.P Chapter felicitated the renowned and senior architects of Andhra Pradesh. The felicitation program was followed by a grand dinner. Over a hundred members of the Chapter were present on the occasion.

It was very pleasing toÂ  know that the Hon’ble Chief Minister Sri Reddy was a fine cricketer by himself and he had led the Ranji team of Hyderabad on the field. The former Indian captain Mohammed Azharuddin played under his captaincy. He encouraged the sports activities of IIA.Â  It is complimented by the fact that the Andhra Pradesh Chapter are the winners of the NationalÂ  CricketÂ  Championship this year.